To Gabriel and Elijah Robinson, from Grandma Chris

To Gabriel Robinson and Elijah Robinson, sons of Reginald (Nazir) Robinson in California. (Maybe you’re in Thousand Oaks, or elsewhere in Ventura County?)

I want you to know that your Grandma Christine loves you very, very much and thinks of you every day.

Please know that she misses you very much and wishes she could see you.

She asked me to create this web site just for you so that some day you’ll find out how much she loves you and cares about you.

My momma had us kneel and pray every night before bed. I and my sisters were carted off to a Baptist church every Sunday. I always found it extremely boring and by the time I was 5 years old had already decided it was all fiction.

Years later, as an adult, I gave the Evangelical church a try. Again, I tried mightily to believe, to subscribe, to “practice”, even taking Bible classes. I had people “talking in tongues” over me, praying over me, forcing my head back as an indication that the Holy Spirit had entered my body. I was going through a deep depression and truly wanted to believe. I tried very hard, including making sizeable tithes every Sunday. The more I tried, the more I “read the Bible” and listened to the preachers preach, the more I felt like a failure; the more I realized I would never be “good enough” in God’s eyes to be a “Christian”; the more I realized I didn’t believe that God had such strict requirements (putting it plainly), if he really did love me unconditionally. None of it ever made sense to me.

When I questioned my pastor about my disbelief, his explanation was “The stories in the Bible are metaphors and not to be interpreted literally”.  I decided at that moment that I’m too much of a literal thinking person to spend my life trying to believe something that made no sense to me; that the “Bible” was written not by Jesus, or God, but by a group of men who tried to think of every possible scenario to control the masses, and that the “Bible” is subject to convenient interpretation by those interpreting it.

Religion is a cult, plain and simple.

I remember my great-grandma who was around 90 at the time and who still owned a wooden ice box though it was no longer used as such, telling me when I was a child (I was like 8) how much the world had changed over the course of her life.

As an 8 year old, I struggled to imagine what she described–a life without cars, refrigerators, TV’s and the like.

Well, this story makes me feel somewhat the way I imagine she must have felt–in disbelief, regretful that this is the future that will inevitably affect every single aspect of society yet my own life (and hers) will be (were) affected momentarily due to my age and my ensuing longevity (and hers), and awe, all at the same time. How weird.

This is the transcription of a conversation between Christine, Willene, and John during Thanksgiving week 2014. This way Christine’s grandsons Elijah Robinson and Gabriel Robinson will know more about Grandma Chris’s life as a child.

John: So what is your favorite nursery rhyme or fairy tale?

Christine: Mine was always Old McDonald Had a Farm.

Here’s the transcript of a conversation between Christine and John about the little town of Opp, Alabama, through which we passed almost five years ago. (151222-152048-christine-best-and-worst-of-opp.mp3)

Conversation about Moving To Spain

This is the transcript of a conversation from 2014 between Christine, Patrick, and John while at a Japanese restaurant. The topic, before devolving into silliness, was how to move to Spain as an American. (141007-203740-patrick-christine-asks-about-moving-to-spain.mp3)

Here’s a conversation from 17 May 2014 in which Christine talks about teachers she remembers and their impact on her. Her grandsons Gabe and Elijah Robinson are in high school now and may well have teachers that have an impact in a similar way.

JD: We’ve just come back from the undergraduate commencement at CLU. Now Christine to going talk about those teachers that she remembers.

For 13 years I have lived with anticipation of when I would again see you. Today, I at least got to see pictures of you.

I love you very much and miss you terribly.

JD: What is it that you like most about Cracker Barrel?

Christine: Well, Cracker Barrel, it is a family restaurant, kind of homey, kind of country-like. It has home-cooked country kind of food. I don’t think the portions are overly large, especially the side dishes. It’s a reasonable amount of food.

John: What are your best memories from childhood?

Christine: My best memories are my sisters. Really. My sisters, to tell you truth. And, the older I get, the more I realize that. And my mother, ya know. I adored my mother. I loved my mother. Even though there were times when I hated her.

Gabriel and Elijah Robinson, here are some pictures of Grandma’s pets. She looks forward to the day when you get a chance to meet them. 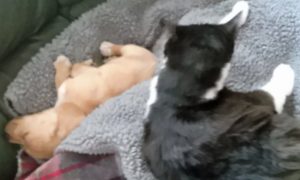 Kitty Poo watching on baby Lucy as she sleeps.